The Fire Investigation Unit has two shift investigators and one 40 hour investigator who oversees the unit. The two shift investigators split calls based on availability and whether the investigator is on shift that day. The Fire Investigator positions are filled by members of the department that are also full time firefighters working a normal shift schedule. In addition to the duties of a firefighter, EMT or Paramedic, as well as their other shift projects, each of the Sanger Fire Department investigators are certified from the California Office of the State Fire Marshal, and must complete basic and advanced courses in fire investigation during their initial and ongoing training. Our investigators also receive additional training locally, as well as from different parts of the state. In fact, each of the investigators belongs to a regional, and a state, association of fire investigators. The regular meetings they attend feature the most recent information available from the areas of fire behavior, law enforcement, legal opinions and court preparation.

There were 100 total fires in the City of Sanger in 2017. Total fires include: structures, vehicles, rubbish/trash, grass and miscellaneous fires. This number represents a 5.26 % increase compared to 95 total fires in 2016.

Of the 100 fires in 2017, there were 25 structure fires that were investigated by the Unit. There was over 300 additional hours spent by investigators performing interviews of witnesses and suspects, photographing the incident scene and collecting evidence, performing follow up investigations and working with law enforcement. Of these 25 structure fires, after thorough investigations, 3 were determined to be intentionally set and considered arson fires.

More Information About a City Fire

If you have information about a fire in the City of Sanger, please contact the Sanger Fire Department at 559-875-6568. 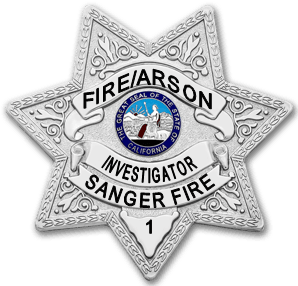